Shopping Cart
Your Cart is Empty
Quantity:
Subtotal
Taxes
Shipping
Total
There was an error with PayPalClick here to try again

Thank you for your business!You should be receiving an order confirmation from Paypal shortly.Exit Shopping Cart

The Three Phases of Women's Mid-Life

MidLife is about Personal Growth and becoming the person one was meant to be. Some of the changes that occur can, at first, seem quite frightening. To lose one's identity seems like a tragedy, until you realize it is just part of the process towards, a new, improved, mature individual.

PHASE ONE - In the 1st phase, which Life Transition Researchers, call the pre-liminal phase, you begin to experience uncomfortable emotions, as your life circumstances change. You may feel misunderstood, confused, and frustrated. You become more forgetful and possibly feel like your going crazy. Many of your life experiences at this time, change the foundations that your life has been built on, causing you to feel unstable. You may have experienced health issues and/or problems with aging. Your children may have become independent, and/or your parents may need help, or they may have passed. Negative emotions associated with these changes may be causing you distress, and you may even experience feelings of anxiety and depression. It is very clear to you that a change needs to happen.

PHASE TWO - Liminality is the 2nd phase, it is an in-between place, where you clearly feel you are not the person you were. So who are you? The answer to this question remains to be discovered.

Mourning your younger self and the changes you are experiencing is the hallmark of this phase and is required for a successful transition. Contacting a therapist in your area to work through this difficult time, may help you discover a new direction that will benefit you as you navigate this change. If you are in California, you may call me at 949-285-5199.

The good news is - these uncomfortable feelings can lead you into a journey of self- exploration and/or into therapy. If you decides to go back to school or begin a new career, you may have one foot in and one foot out, but you know some change is about to happen.

PHASE THREE - In the Third Phase, which is the post-liminal phase of reincorporation, your circumstances are usually adjusted, as you experience new thoughts, and feelings. Your behaviors will correspond more closely with your new values. Your emotional distress lessens as you feel an increased vitality and excitement for your life, and your future. In this phase you may be in school, have started a new business, or made whatever positive change is meaningful to you.

Are You Flying Solo in Your Partnership? 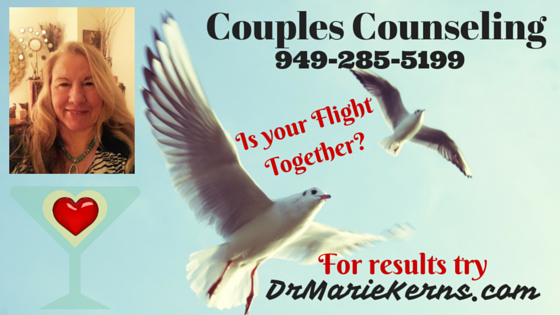 In a Partnership its easy to lose focus on the relationship over time. One person will come home from work and greet their partner in a more or less, routine way, that has become a negative repeating pattern of INATTENTION.

"Hi Honey, how was your day/" While this might be caring when the relationship is new, after hearing this 365 days X many years of marriage, what does it really mean? In my Private Practice, focusing on Couples, this routine greeting is meant to be a welcoming hello, but many times it turns out to be less than engaging.

TIPS for Connecting with your partner:

1. Agree on a shared meaning for your interactions. In the example above, this automatic greeting could mean "Im tired, give me ten minutes to unwind. before we attempt a meaningful conversation."

2. Vary your routine. Meet at a coffee shop for a relaxing cup of Lavendar Tea before going home to begin the evening.

3. Schedule a Date Night once a week. Dress for your partner with the same interest, as when you began dating.

If your not at the level of arranging these three suggestions, it may indicate that you could benefitt from a Counseling Session in my office.

I'm in Irvine at the University Tower - UCI Adjacent

Have a Question? Ask Here

When a happily married woman comes into my office with complaints of increased sexual fantasies, or possibly even an affair with a man or a woman who is not her partner, how do I conceptualize her issues? How do I help this woman?

I am relieved that as a Licensed Marriage Family Therapist, in the state of California, my job is not to direct her actions or pass judgment. I am here to help her clarify her issues, present her with information, and assist her in developing increased confidence and personal empowerment that will assist her in arriving at the best decisions she is capable of making for herself.

Shellenbarger (2004), the author of The breaking point: how female midlife crisis is transforming today’s women, explains that being overwhelmed by sexual fantasies is an indicator of a mid-life woman entering liminality, which is often displayed by extremes of emotion and behavior. Liminality is defined as that in between place “The structural ‘invisibility’ of the liminal personae has a twofold character. They are at once no longer classified and not yet classified” (Mahdi, 1987, p 5).

Connie Zweig (1997), a Jungian Analyst, asserts that the issues at mid-life are the call of the “Self” to begin an unlived life. She believes the symptoms that many women experience at midlife can be explained as an archetypal shift. Archetypes can be described as predetermined patterns of feeling and thinking that are common to the entire human race (Corneau, 1996). So what is this woman’s archetypal shift? Is she experiencing the loss of her youth? No longer a young woman, yet not one of the elderly, she is lost in the middle.

How will I help this woman who is lost between two worlds? Zweig, (1997) believes it is her shadow that forces mid-life women to face their unlived life with its limited choices, as the ego is destabilized and the sense of identity is shattered. Is this what all of her sexual fantasizing is about? Is she trying to regain her youth, or is this a distraction to avoid looking at her age?

A woman’s shadow includes the parts of herself that are located in the personal unconscious, of which is unaware. Shadow elements are incompatible with the conscious personality and must be integrated to achieve wholeness (Weinrib, 2004).

The goal for this woman who is being overwhelmed by sexual fantasies would be to balance between restraint and exploration, as she tries to integrate these regained passions. Women in this phase can use this increased desire to integrate their new passion in a way that does not destroy the parts of her life that are valuable. Finding a new relationship to her renewed surge of needs and desires is at the core of this liminal phase of transition. This woman would benefit from looking at the object of her desire, exploring this attraction, as a possible projection (Shellenbarger, 2004).

If she continues to operate out of old strategies and attitudes, symptoms may result. The symptoms are a result of a clash between the acquired personality and the demands of the Self and this clash may cause her to wonder who she is. The person she has been, is being replaced by who she is becoming, a normal developmental transition. Psychologically, the old self must die, so the new self may be born. This death rebirth is a passage. In traveling through the Middle Passage one may achieve their potential to earn the wisdom of mature aging (Hollis, 2003). As part of her therapy process, it is important to mourn the death of her youth, and accept the aging process that defines her new identity.

At mid-life, women benefit most from a form of therapy that brings meaning and symbolic value to their life. Mid-life issues are not about fixing problems and relieving symptoms as quickly as possible (Brehony, 1996). Jungian theory offers a mid-life woman a way to discover her purpose, as she enters the second half of life, gaining a deeper awareness of the unconscious forces that have previously blocked her growth.

In this case I would rule out:

1. Relationship Issues by referring her and her partner to a couples counselor .

2. Persistent Genital Arousal Disorder (PGAD) which is a condition that is experienced as extremely distressing, unsolicited genital arousal lasting for hours and sometimes into days without sexual stimulation or desire (Leiblum, 2006).

3. Hypersexuality which is an excessive feeling of sexual desire.

Dr. Kerns is a Skilled Psychotherapist in Orange County, California

"So many times Couples will say the most awful things about their partner.

Once they learn about projections, if they are open to it, the dynamic shifts from blame their partner - to insight about themselves". Dr. Kerns 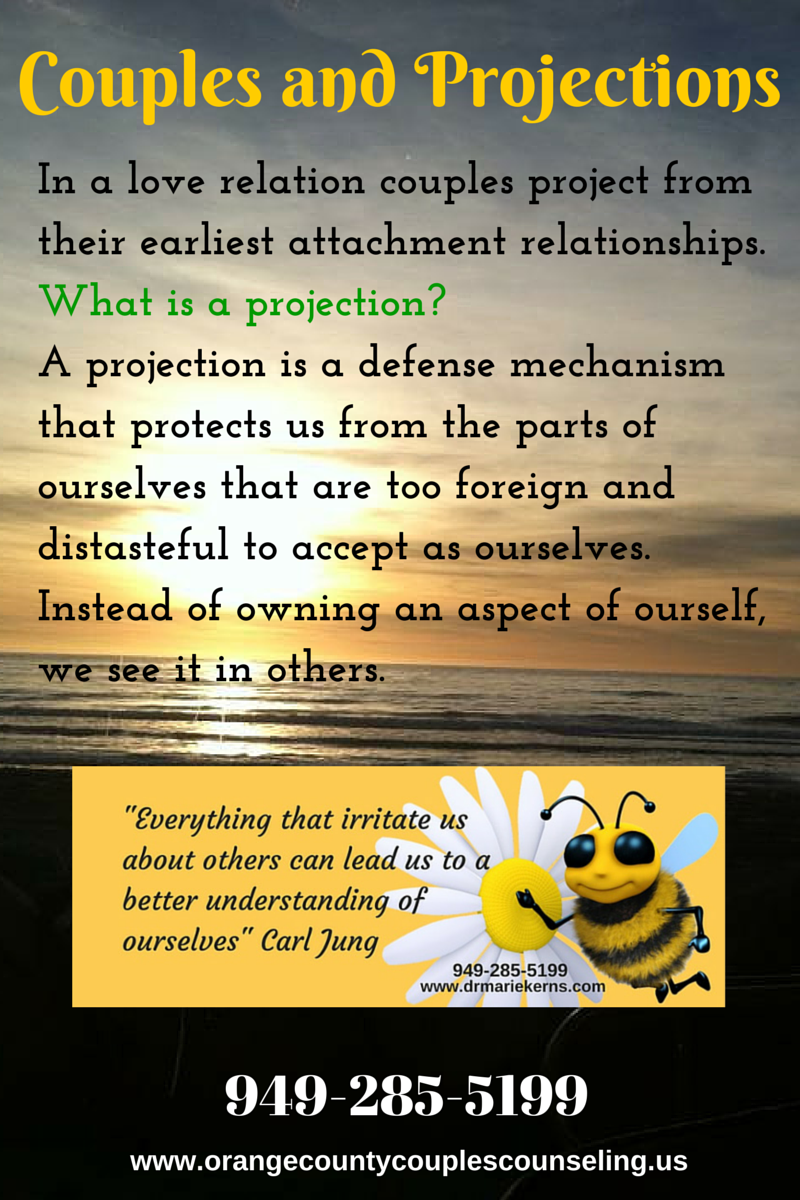 The Betrayal is real. What does this mean? The past years events take on new meaning, causing the cheated on partner to feel disoriented. Redefining past memories is exhausting. The betrayed partner’s life was not what they believed it to be. What does this mean for the partnership? How can Couples Counseling with Dr. Marie Kerns in Irvine help?

My first concern is supporting the betrayed partner, and you may wonder how I do that? I make it very clear that past perceptions of concern were real. There are times before the discovery of infidelity, that questions and accusations filled the air. The offending party typically defends themselves using a defense mechanism that shifts the anxiety and guilt from themselves – to blame on the partner. That is, they find an insignificant fault of the partner and blow it up, totally changing the subject. This is called crazy making, and it is emotional abuse. In my sessions with couples, I name it, and explain how it works. You would think this new awareness would end the offending partners’ continuing to blame their partner. Well, it does not, initially. Accepting responsibility is a process and it may take time.

In our weekly sessions, we discuss issues such as this, and more. The betrayed partners perceptions are supported, and they becomes empowered to trust themselves first, and their intuition, when something seems off alignment.

Please visit DrMarieKerns.com to learn more about me, where I am located, and my Fees. You may also call me at 949-285-5199. I would be honored to work with you.